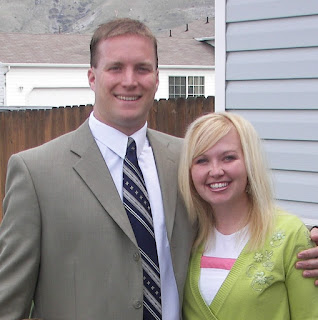 Ok, so there have been a lot of tags going around about our husbands. I think I’ve seen 6 in the last day, so I kind of combined them into one… It’s always fun talking about LeGrand, he’s amazing!!! I Love being married to him!!!
What is his name? LeGrand David Laing
How long have you been together? We’ve been married for 8 ½ amazing years
How long did you date? We’ll he got off his mission in January, we were engaged in April and married on July 17th. But I had my eyes on him since I was 12.
How old is he? He just turned 30 in December. When he turned 29 he has a really hard time with this, now it’s still weird but I think he’s ok with it. I personally think it’s really cute.
Where did you meet? We grew up in the same stake. We went to rival High Schools, I had a crush on him since I was 12. We were acquaintances and went out on one date during high school, we wrote a 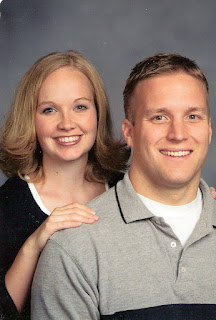 few times on his mission, but we really hit it off after his mission.
What was the first thing you said to your husband? Since I was 12 it was probably something really dumb.
Where was your first date? Our date before his mission Ammon set us up on a double date, LeGrand and I and Ammon and Marcia. (Thanks Ammon!!!) Well we went miniature golfing and then went to Hogi Yogi. I had soooo much fun, but when we started dating after his mission I said something about our date and he didn’t remember it. I was mortified!! For our first date after his mission, I was in Fresno just visiting with some friends, he had only been home for about a week, well we were getting a group of friends to get together and go ice skating. Everyone talked me into calling him and inviting him to go. I wanted to see him, but didn’t want to call him. My friends said, “just call him, if you make a fool of yourself it won’t matter, you can just go back to Vegas and you’ll never see him again.” So I called him and we had a blast!!!!!
Who kissed who first? Oh this is embarrassing, ok I had decided that the next boy I kissed was the boy I was going to marry. LeGrand had been home from his mission for almost 2 months and I knew I wanted to marry him. (He knew he wan 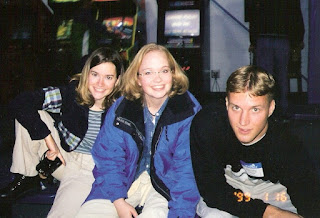 ted to marry me too) Well we were at a park by my parents house in Henderson and we were looking at each other and I could tell he wanted to kiss me. He was really nervous and I was trying to be patient, well he was taking too long, so I jumped in and kissed him. I think we were kissing for a while before he realized that we were kissing.
Who proposed? LeGrand did, he was living in Fresno California and I was living in Henderson Nevada (Yeah we did the long distance thing, it was hard) Well I’d been getting cute cards in the mail every day for about 2 weeks. I went to Fresno to be with LeGrand (we would switch off, every other weekend we would take turns going visit the other one) LeGrand & I went on a picnic at the park that was by my house when I used to live there, anyways after we ate he handed me another card. On the front of it was a picture of a old couple walking on the beach holding hands, and it said “….I 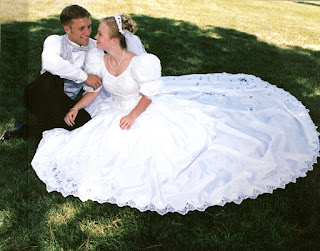 can’t wait to grow old with you”…. I looked up at him wondering if he meant what I thought he meant.. Behind the card he was holding a box with my ring in it. He knelt down and asked me if I would marry him. It was perfect.
Where were you married? In the Las Vegas Temple on July 17,1999
Where was the honeymoon? We stayed 2 nights in Las Vegas, then we stayed in a cabin in Yosemite for a week!! It was incredible!!! (Thanks for the cabin Nancy!!!!)
How many kids do you have? We have 4 beautiful children, Brayden is 6 ½, Adelyn is 4 ½, Sophie is almost 3 and Kolby is 1 ½ months old. They are amazing kids, they bring so much joy into our lives.
Who eats more? If anyone knows LeGrand you would already know that answer;) LeGrand all the way!!! 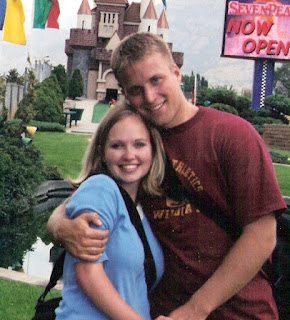 Who is taller? Ummm it’s close…just kidding, LeGrand is by far.
Who sings better? I do, but LeGrand has a really good voice, but he hasn’t had any vocal training.
Who is smarter? I’m smarter in math, he’s smarter with most everything else.
Whose temper is worse? Probably LeGrand, except he doesn’t even have a bad temper.
Who does the laundry? I do.
Who sleeps on the right side of the bed? If your in bed I do.
Who pays the bills? I pay the bills, but we talk about our budget together and make all the decisions together.
Who mows the lawn? LeGrand does, I actually don’t mind doing it, but he doesn’t like me to do it, I did it once pregnant and he wasn’t too happy with me when he got home. I was just trying to surprise him…
Who does the dishes? We do them together usually. 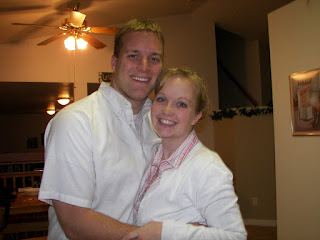 Who cooks dinner? I do for sure, LeGrand could do it, but we would eat leftovers, cereal or toast every meal.
Who drives when you are together? LeGrand does usually. I like it that way!!
Who is more stubborn? I don‘t think either one of us is really stubborn, but probably I would be more.
Who is the first to admit when they are wrong? Most of the time I do.
Who has more friends? That’s hard to say because we share friends. I do more things with friends(girls nights out). Everyone loves LeGrand though, he’s a real people person.
Whose parents do you see the most? Mine, they live 6 hours closer to us and they come up to Utah to visit a lot, but we love spending time with the Laing’s too, they ar 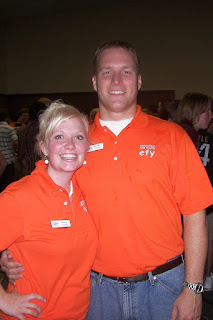 e just farther away.
Have you ever broken the law with this person? If you count speeding, then yes.
Do you trust this person? I trust LeGrand with my life. He is honest, hard working, dependable, trust worthy…..
Where do you see each other in 15 years from now? Being more in love than we are right now, being faithful in the church, having High School and College age kids, and looking forward to having kids married and becoming Grandparents…ok that sounds weird, but Brayden will almost be 22 then, Adelyn will be almost 20, Sophie will be 18, Kolby will be 15... That’s weird!!!!
I love you LeGrand!!! I’m grateful for you and all you do for me and our family!!!!
So if you have a Sweetheart, consider yourself tagged ;)
Posted by Becca at 9:46 AM

I love the pictures of you guys and seeing how much things have changed. The EFY shirts are cute and that is so neat that you guys get to share that experience together every year. It really is fun to reflect on "US" instead of the kids everytime and to share some fun things about our hubbies. Thanks for sharing! ;)

This is sooo cute. I love looking at the older pictures. I think the two of you look better and better as you age. Isn't that funny? It is like we grow into ourselves.

I'm sure glad you found each other. I love you both! Can't wait to see you Sunday!

Very cute. You two make a gorgeous couple! I remember about 15 years ago after Jennifer got her license you wanted to drive by his house. (Why do girls like to do that anyway?) I think it's great that your memories go so far back. Fun stories to tell the kids.

this is so adorable! :) I love your story. you really have the greatest little family.