Our Best Christmas Present Ever!!! 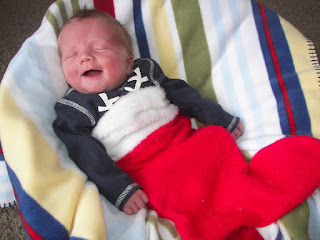 After 9 months of pregnancy, which included feeling our baby move inside of me, the ultra sounds, hearing the heartbeat, finding out that it's a BOY, preparing everything, normal unpleasant symptoms, bed rest, heart burn, gestaional diabetes, and a severe case of the itches the last month and the non-stress tests and extra ultra sounds at the hospital the wait is finally over!!!

Our little son Kolby David Laing joined our family a little sooner than expected. In fact he was born on the only day that we really didn't want him to be born, but that's ok. There was no holding him back. Kolby just wanted to spend his first Christmas with us. Kolby was born at 5:10 A.M. on Christmas morning!!! He weighted 7 pounds 8 ounces and was 20 inches long. Kolby was almost 3 weeks early, since we were due on January 12th. 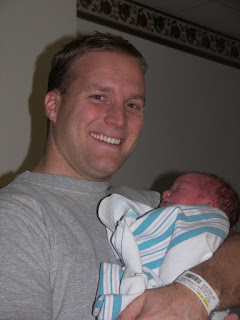 Since we were so close to Kolby's due date we decided to stay at our home for Christmas. We have always been at one of the parents/grandparents house which we have always loved but we were excited to do our own Christmas for the first time. Christmas Eve we went over to Grandma and Grandpa Rasmussen's house and had our big Christmas Eve dinner, we had so much fun with Grandma and Grandpa and the Aunts, Uncles and Cousins. Then we came home, we got Brayden, Adelyn and Sophie all ready for bed, left cookies and milk out for Santa, and of course Carrots for the Reindeer, had family prayers and talked with them about what to expect in the morning like come in to mommy and daddy's bed and don't go downstairs ect... They were great, they went to bed really fast cause they knew that if they didn't Santa wouldn't come.

LeGrand and I had so much fun getting everything ready and layed out, we made a breakfast casserol and got all of that ready so that we could just stick it in the oven in the morning. We had a blast being Santa, LeGrand even jingled some bells so the kids could hear. Anyways when all was ready we went to bed. I hardly slept at all, I'd been contracting alot, but I always do so we weren't paying attention to them but man was I itchy. Ahhh it was driving me nuts. I had dosed off, and I kept feeling sooooo uncomfortable. Finally I came to my senses and realized that the contractions were getting alot harder and they were really close together. I started to cry, LeGrand asked me if it's because 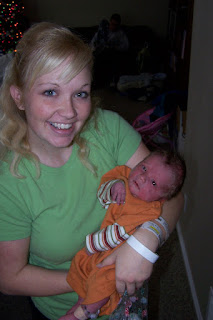 they hurt, and I told him no(even though they did hurt) but it was because I didn't want Kolby to have to have his birthday on Christmas. LeGrand gave me a blessing and we realized that we wern't even packed. LeGrand was amazing, he packed, called Uncle Shawn and Aunt Sue (it was about 4:00am) to come and watch the kiddos and he was there with me. They got here and we decided that it would be safer and faster if Shawn drove us to the hospital in his new Yukon, the roads were really icy and in the snow storm we thought it would be safer and faster this way. When we got to the hospital I was dialated to a 9 and my doctor was still at home. LeGrand was so amazing, he was there by my side the entire time, encouraging me, kissing me, giving me ice chips and telling me that I could do it and that he loved me and was proud of me. Kolby was born at 5:10. I know that was really fast, but it was definatly the longest hour of my life. We didn't get an epidural and Kolby would have been born sooner if we didn't have to wait for the doctor to get there. Kolby is healthy and happy and we are soooo happy to have him in our family. LeGrand was able to get home before the kids woke up and they came into our room, LeGrand asked them if they knew who came last night, they all jumped up and down and said "SANTA", then LeGrand said,"Yeah, but do you know who else came?" They were all stumped, until LeGrand pulled out a picture of Kolby and they all Shreaked together "KOLBY!!!" They were soooo excited. Our Christmas day was alot different than we planned on, but the kids brought the presents to the hospital and we opened presents and played together all day in my hospital room. It was such a memorable day for me. I felt so close to my Savior and I definatly saw the Birth of Baby Jesus in a new light. I asked the kids what their favorite Christmas present was and they all said KOLBY. We feel exactly the same way!!!! 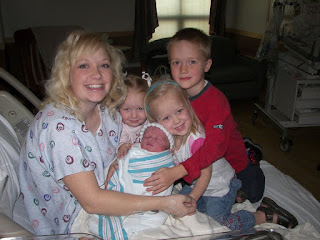 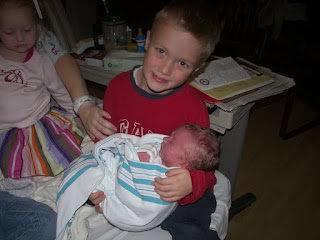 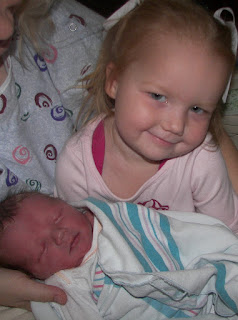 Sophie is a Big Sister!! 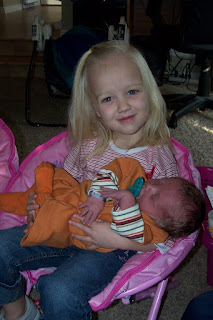 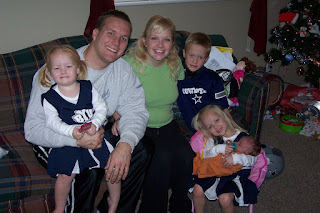 Our 1st family picture of 6. 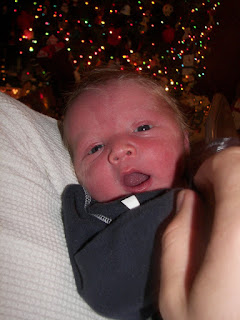