Melt my Heart- Daddy and Brielle

It melts my heart to see LeGrand with our Babies.  It's always been this way, maybe because it's been a while since we've had a baby in our home but watching LeGrand and Brielle seriously is so precious!!  Brielle is so much fun to love and cuddle!!  She is sooooo sweet!!!!  LeGrand is such a big strong guy, but he is so tender and this little angel seriously has daddy wrapped around her finger!!! 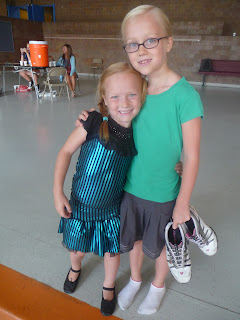 Adelyn and Sophie did a dance clinic with the Dancers from Timpview High School this summer.  They had so much fun!!  What cute sisters!!!! 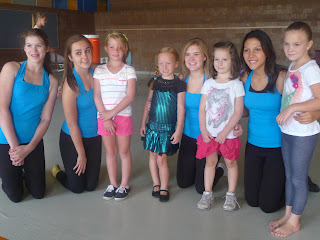 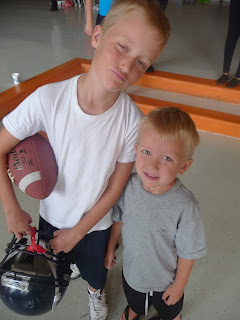 Brayden, Kolby and Brielle loved going to watch the big girls dance too!!!  Addy and Sophie had a pretty good cheering section!!:)

By Sunday July 15th it felt like I'd been in the hospital forever....That morning Brielle and I were discharged and anxious to be home!!!  We got home before the rest of the family went to church.  The Frampton's helped get the kiddos ready until Grandma and Whitney got there!  Brielle got to play with Grandma and Whitney while I slept, which was heavenly!  I swear it's impossible to sleep in the hospital, with the nurses coming in all the time, the lights and sounds...It felt good to sleep in my own bed!

I love bringing a baby home from the hospital.  It's such a sweet time for LeGrand and I!!!  Getting Brielle all dressed and leaving the hospital makes it all sink in that she is really ours, that she will be in our family forever!!  I'm so grateful I'm her mom.  I can't imagine life without her and she has only been in our family for such a short time.

I LOVE seeing LeGrand holding Brielle!!  He's so big and strong and she's so little and content to be held, protected and loved by her Daddy!!  She's seriously a lucky girl to have such an amazing Daddy!!

Oh I could just eat her up!!

The kids were sooooooo excited to have their baby sister home finally!!!  As soon as we drove up they were out the door running for the van!  It was a welcomed sight for me!  I love these 5 kids more than words can say!

When should we go to the hospital?  It's always a question that we have had a hard time with. Not wanting to go too early resulting being sent home, this happened when we were about to deliver Brayden and Adelyn.  Getting there almost too late, when we got to the hospital to have Sophie I was dilated to an 8, when we got to the hospital with Kolby I was dilated to a 10 and almost had him in the car. LeGrand and I and the Dr's were worried that history would repeat it's self which it usually does except for the fact that we were about to deliver our 5th and it'll probably happen faster.  If it happened any faster than it did with Kolby we would have a baby at home or in the car.  Something I didn't want to do.:)  On the 12th I had to go into the Dr's office for non stress tests on Brielle, I was contracting a lot, but they weren't hard or very consistent.  I had been dilated to a 3 for a few days and wasn't progressing any more.  Thankfully Brielle looked healthy and not under stress so as we were leaving to go home they told us if anything changes at all (intensity or consistency) that I needed to get to the hospital as fast as we could.  That night I was having contractions, several woke me up, I knew we still had time but decided it was time to head in.  We got to the hospital around 7 am and was dilated to a 4.  I've never been in the hospital very long before we've had a baby so this time felt like it took forever!  By 12 I was still dilated to as 4 and was thinking that they would just send me home since I was 3 weeks early and I wasn't progressing despite the contractions I was having.  I was surprised when I got the word that my Dr was going to come in and break my water to get things going!  We all thought that as soon as my water broke that I would just go into labor, but nothing happened. If anything it slowed down.  They wanted me to have a baby in a controlled environment and they felt if they sent me home that I wouldn't make it back.

LeGrand was, as always, my rock!  He was amazing, I seriously couldn't have done it without him!!!!
We had an awesome room!!!  It had a jetted tub and was all set up for natural birth!  I loved it!  The Nurses were amazing and sooooo supportive.  3 of the nurses that were with me all day got off at 6 and they stayed will Brielle was born at 6:51!  It was so cute and such an extra mile that I appreciated!!!

Liz came and hung out all day...I didn't think that we would be there that long, but it was so fun to spend time with her!!  She's amazing!!!
My parents, Whitney and Grandma jumped in the car as soon as they heard that we were at the hospital.  We didn't think that they would make it since they had a 6 hour drive....but we were surprised.  They made it!!!
Lona Marie and Emily watched the kiddos while we were waiting and waiting!  It was fun to get a visit from them!  They brought flowers and lots of hugs!

Our last family picture as a family of 6!!!
The kids were soooo cute.  They were anxious to make sure that I was OK.  Brayden and Adelyn seemed most concerned, probably because they are oldest and understand more than Sophie and Kolby.  It was good to share the excitement together!!
I loved that I wasn't confined to bed!  I could walk around with the portable monitor, sit on the birthing ball, walk some more...it was wonderful!

We were all surprised when the family got there and I was still pregnant.
I love me mom and sisters!  It was a neat experience for me to have them in the room when Brielle was born!  LOVE, LOVE, LOVE these girls!!! These are the 3 girls that I've named my 3 daughters after.  Adelyn Elizabeth, Sophie Kathryn, and Brielle Whitney!!!


At about 6:00 they started me on petocin.  They started at a 2 and then bumped it up to a 4 a few minutes later and that's all it took!  I wanted to go natural, no epidural.  When I realized that they were going to start me on petocin I was totally disappointed.  Even though the contractions are lots harder with petocin I still wanted to do it without an epidural.

Seriously LeGrand was amazing!  I'm so grateful for him.  He kept telling me that I was doing great, that he loved me, that I could do it!!!  Being induced without an epidural was a different experience than we've ever had, but I'm so glad we did it!  The contractions were lots more intense but do-able.  At 6:51 Brielle was born!!  It was one of the neatest experiences of my life.  Dr. Broberg was the Dr who delivered and I had had an apt with him the previous Tuesday.  At that apointment I told him that if I could I wanted to help pull her out.  He had never heard that request before but said that I could do it!  Right after her head and shoulders came out he asked for my hands.  I was shaking and said that I couldn't do it.  He told me that I could do it and a nurse encouraged me, I reached my hands down and put them under Brielle's armpits and pulled her out and right up onto my chest.  It was one of the most amazing experiences of my life.  She was so close to me, I was holding her while LeGrand cut the umbilical cord, while they checked her and while they wiped her down.  It's so amazing to be a partner with God in bringing this sweet little angel into the world.   Having a baby hurts worse than anything I've experienced, but it is also the most rewarding experience ever.  I'm so grateful that God had given me the opportunity to have 5 children.  I am so blessed. After she was born was the most tired I think I've ever felt, but it was also so peaceful.

Brielle weighed 7 lbs 15 oz and was 20 inches long.  Not bad for being 3 weeks early!  I'm glad she was born when she was or else she would have been lots bigger.  Even at 3 weeks early she was our biggest.


I love watching LeGrand with our kids.  He's such an amazing husband and father!
LeGrand, Dr. Broberg and Brielle


Brielle's lips started turning blue and so they hooked her up to a bunch of monitors to make sure that she was ok...It was scary for us, it brought back lots of memories of when Sophie stopped breathing after she was born and had to have a blood transfusion... Luckily they were keeping a really close eye on Brielle and she's just fine.  We laughed and had to take this picture when we saw that she had grabbed a hold of the wires and her umbilical cord.... I thought it was cute.  I'm grateful that she's healthy and strong!

It was so fun to have my mom, Liz and Whitney with LeGrand and I in the delivery.  I love them all so much.

Spelling out BABY!!
Uncle Paul got there just in time to see Brielle for the first time with the kids and Grandpa and Great Grandma Ras.
Coming in.....


We actually drew #'s before Brielle was born to decide what order the kids would get to hold her!

Our first family picture of 7!!


Grandpa holding Brielle for the first time! My dad has been sooo cute this whole pregnancy.  He called several times a week on his way home from work just to check on me and see how I was doing.  I really appreciated that.
Brielle has the best Grandparents ever!
Whitney and Paul

Grandma holding Brielle!!
Uncle Nathan holding Brielle!
Nathan and LeGrand with the cousins!
Liz and Brielle, it was so fun spending the day with Liz!!!
Oh how I love my Mom!!  She was always there for me too, I called her many times after dr apts in tears, or during hard times and she always made me feel better.  She always took the time to make sure I knew she was there for me even though she's taking care of my Grandma who has Alzheimer's which is a more than full time job.
Wiggy is one of my favorite people!!!
It's so fun to live by Paul and Liz and soon to be Whitney!  My siblings are awesome!