The weather outside is Frightful!!! 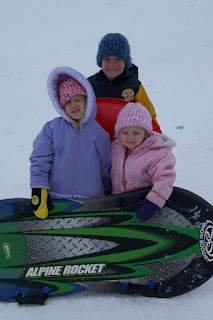 The weather outside is frightful... but not for sledding, it's actually perfect! We have had so much fun this winter going sledding as a family. This is the first year that we have really taken advantage of all the snow and the hills and gone sledding a lot. Ok, it might have something to do with that this is the first year that the kids love it, I mean really love it. Brayden and Adelyn are sooooo brave and they love going down again and again. We also got an awesome sled for Christmas (Thanks Bryan & Helga!!!) and that helps too. 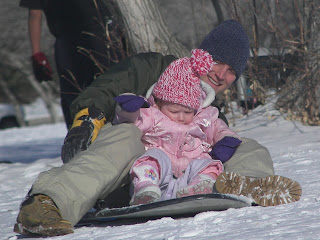 We have been able to go sledding with the Mom & Dad Ras, Whitney, Paul, Stewart & Emily, Bridger & Angeli, Liz & Chris, the Frankes and many times with just our family. Kolby & I and on occasion Sophie, have been the photographers and Cheerleaders from the car. I can't wait till LeGrand & I can trade off sitting with Kolby and I can go sledding too. I'm feeling really good, but I don't know if I would continue feeling good if I went sledding when Kolby was a week old if you know what I mean.


So yesterday when we were sledding with the Frankes (LeGrand and Kevin served their missions together, and they just moved to Springville!!) we saw something that was a little bit crazy and unusual. A Family came to Rock Canyon Park with a big couch, yes a sofa. They put skis on the bottom of it and had a rope tied around it. They pulled it up the hill and rode it down the hill. When I saw what they were doing, I thought, "yeah that's real smart!!" But it actually looked really fun!!!! They went down 2 or 3 times and it was looking fun and safe, but the next time they went down they hit a bump, the skis broke and they all did a face plant in the snow as they flipped over the couch (may I add, they were going really fast), the couch rolled over them. It actually would have been funny except that they had brought their 65 year old grandma on that one and she was hurt pretty bad. I hope that she'll be ok. I do wish I had brought my camera with us, and if I got that on video it actually would have won on America's Funniest Home Video, but oh well, I thought the story was worth sharing even if I didn't have pictures. 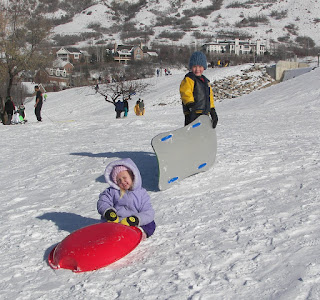 The bravest Sledders ever!! 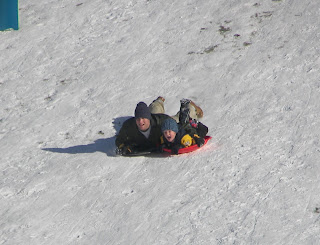 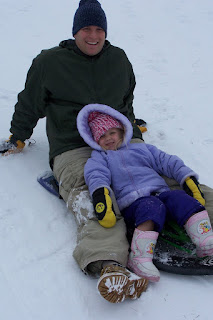 Even if snow gets sprayed up in Adelyns face she doesn't cry. Sophie on the other hand hasn't quite got to that point yet. After a run or two she's had enough and comes and joins me in the car. We have lots of fun watching the big kiddos together though and of course she loves helping me make sure that Kolby is happy. She's a good helper. 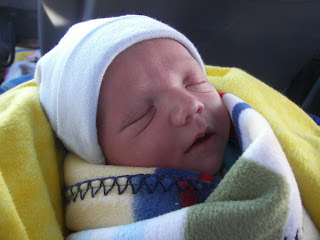 Kolby loves it when we go sledding, except he usually just sleeps right through it. 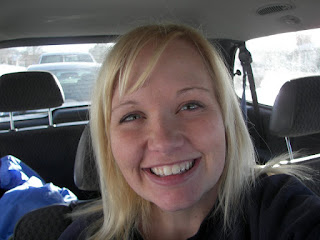 Sophie actually took this picture. It's even centered kindof, can you believe it. The kids actually do take really good pictures most of the time. It's fun. 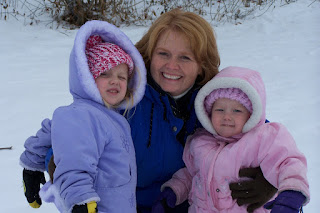 Adelyn and Sophie love Grandma Ras!!! Well we all do but you know what I mean. 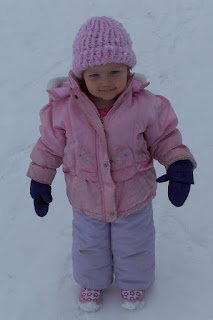 Sophie gets herself all dressed to play in the snow, she only needs help with the gloves and sometimes the hat. She's becoming so independant! 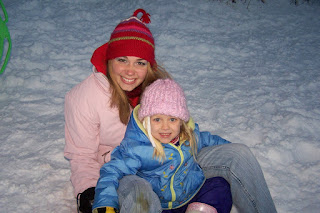 Liz and Chris took Brayden and Adelyn sledding, they had a blast!!! Thanks guys!!! 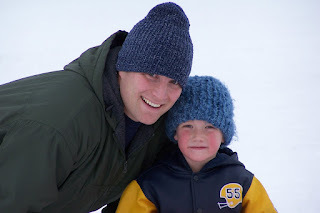 Two of my three handsome boys!!! Brayden doesn't need any help at all. He climbs up to the top of the hill and goes over and over again all by himself. He's so brave and it's so fun seeing him having a blast!! I think he would stay all day if we let him. 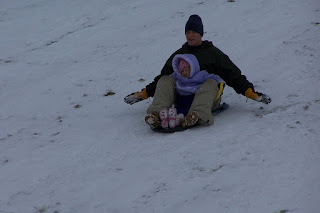 Adelyn is a little dare devil. She loves going fast, you should see her drag her feet to stop if she's going to run into something or someone. She's really good. 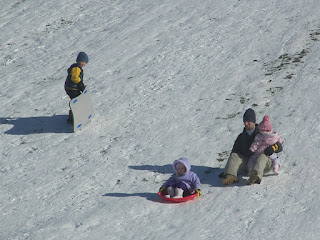 LeGrand gets the Super Dad Award. You should see him taking care of 3 kids sledding. He's often carrying at least one of them up the hill so they don't get too tired, helping them take turns and most importantly helping them have an unforgetable time. He's amazing!!!

We had so much fun with you guys! Is that your mom? She is beautiful. You two look so much alike.

Yeah Becca! I love your posts...I check it everyday, so keep that in mind missie! ;) It sounds like you guys have been having fun. Isn't is amazing? It seems like with Ethan, I sat and enjoyed him a lot of the day in the beginning, but by the time you get to number four, you just have to kind of "go with the flow" and you can't really stop anymore...you got to keep up with all the other kids and their fun activities like sledding, etc. It sounds like you guys have fun. Someday we'll have to take all 8 kids sledding together or something...well we'll bring along ALL the cousins! Thanks for the comment on our blog...I know what you mean with consistency. For the first time this week, all of us have been picking up all of our things, and the house is actually staying clean. Why couldn't we have dicovered this months ago? Anyway, we have been doing some other things that have made life go easier too, so I love your word too! Keep in mind for you though, you just had a BABY...all you need right now is rest and a little chocolate!!!!!!! I am thinking about you a ton! I love ya lots!

One more thing....I want to see more pictures of KOLBY!! :) Just an idea for you next post! You are doing a good job too. Can you believe all the stuff like taxi driver, homework assistant, etc starts this early. Keep up the good work!!!

Hey there! I loved your pictures. Stew and I were cracking up at the story of the couch and the grandma. I will remember not to put my grandma on a couch in the snow any time too soon. I am so home sick for you guys now!!! I hope we'll at lest see you at Liz's "Non Farewell, Farwell" talk. And you look so good! We love you guys!!!

PS In that picture of Liz and Addy they look like sisters! It is so cute!!!

I don't think we'll ever go sledding with you guys again after LeGrand and Dan shared a sled and Dan ripped his nuckles off and hurt his tushy so bad. But that looks so fun. We'll have to try it again. I can't wait until Maggie likes snow. She's not a fan this year. Oh and who is this Chris? You mentioned Liz and Chris like twice. Is Liz holding out on me?