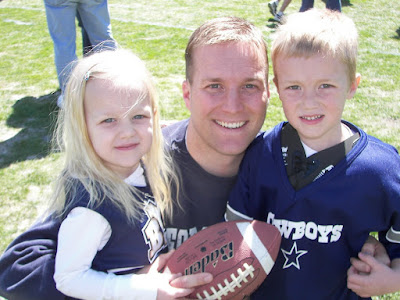 Saturday was an incredible day. In the morning we went over the the LaVell Edwards Statium where there was the spring scrimmage. Before the game there was a kids clinic...we were all so excited, Brayden dressed up in his football outfit, Adelyn and Sophie in their cheerleader outfits... There were tons of people on the field along with lots of the BYU football players. The football players were playing with the kids. Each position had a station, i.e. quarterbacks, wide recievers... We went around and waited in each line for our turn. Brayden had fun plowing into these guys.. It was cute...but the cutest part of it all was when we had got thru about half of the stations and LeGrand asked Brayden if he wanted to go thru them again...Brayden said "No, I don't want to play with those guys, I just want to play with you Dad!!!" I loved it...yeah who needs BYU football players when you have LeGrand Laing as your daddy!! 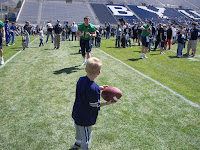 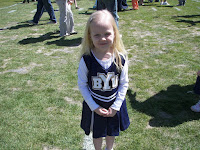 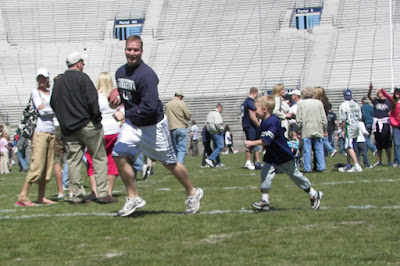 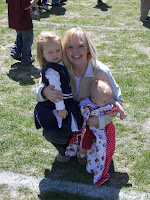 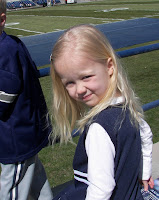 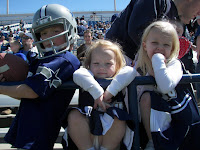 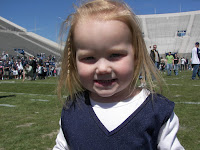 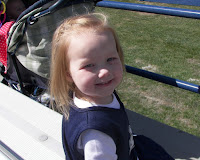 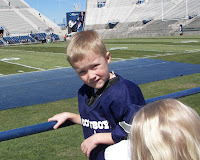 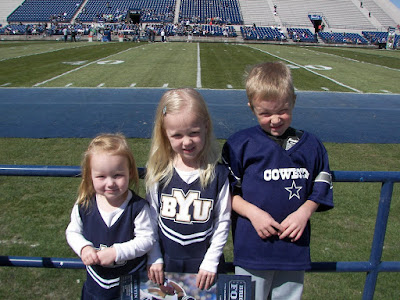 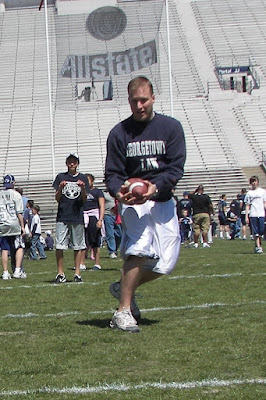 Ever since LeGrand was a little boy he has loved football. I'm not just trying to brag here but he was REALLY good!! LeGrand dominated in High School and then after his mission and after we got married he played College football. The plans were to come and play for BYU(that was his dream for as long as he can remember) anyways while he was playing in California he hurt his neck and couldn't play anymore. It was tragic!! I know LeGrand had fun with us, but I could also see that it was hard...This was his first time actually playing football on "this" field. I know sometimes he wishes that things could have been different, because if he was able to play he would have torn it up. LeGrand I love you and I'm grateful that you are still in one piece and can play sports with our children. I will always think you are the Best Around!!! 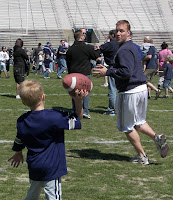 I love these pictures...we love to have fun together. Adelyn got in the fun too. What a doll!! I love seeing LeGrand and Brayden playing football together. I know LeGrand loves it too, and as Brayden gets older and older playing catch will get even more fun! 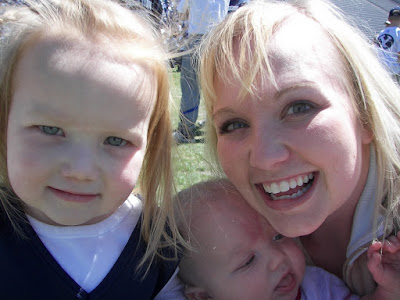 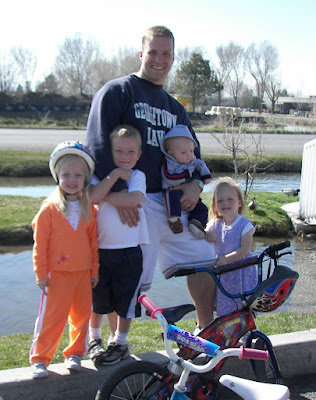 Saturday Afternoon was way fun too!! We went on our first family bike ride of the year! Since Kolby and Sophie needed to be in the trailer...Adelyn got to ride her bike. At first she wasn't sure of the idea of getting booted out of the trailer...but then she got really excited about riding her bike. We rode out to the duck ponds, about 2 miles from our house. We have done this lots of times before, but it was long for Adelyn. I was alittle worried before we started until I saw how cute Addy was and how determined she was!! She made it the whole way all by herself!! I was riding next to her and I would keep asking if she needed to rest...she would say "No, I can do it, I can do it!!" It was so amazing to see such dedication and endurance in her. Adelyn we are very proud of you!! Good job Honey!!! 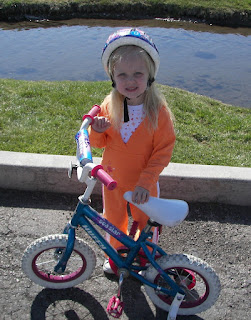 Good Job Adelyn!! You are such a big girl!! 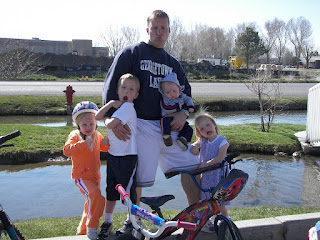 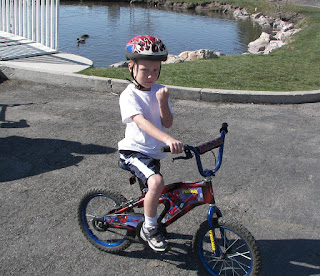 Brayden you are such a stud. You are so speedy on your bike that I can hardly keep up with you!! 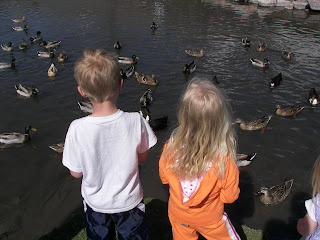 We brought a lot of bread and pop corn and the kids had a blast feeding the ducks and fish!! 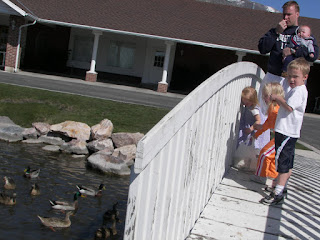 Isn't this so beautiful. We are surrounded by tons of beautiful places. 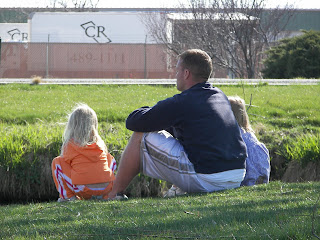 LeGrand is such an amazing husband and father. When I just sit and watch him with our kids I feel so blessed and grateful to have him in our lives. He is such a good example to them and he always makes sure that everyone is having fun!!! Thanks Honey!! 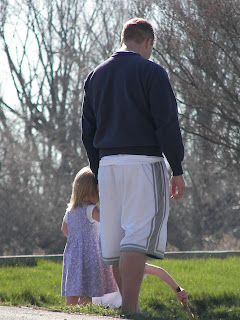 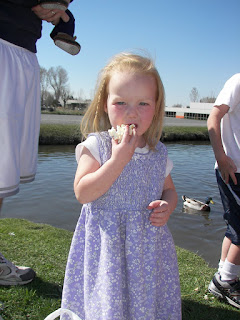 One fun thing about bringing popcorn too was that the kids were able to eat the popcorn too. Does it get any better than that? 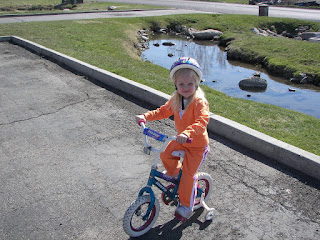 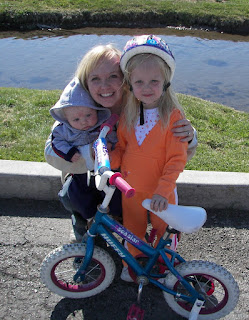 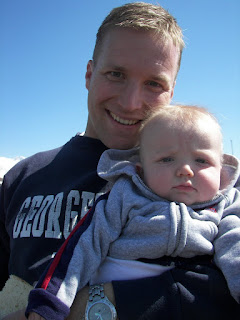 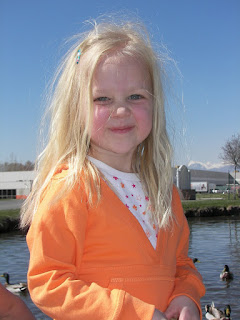 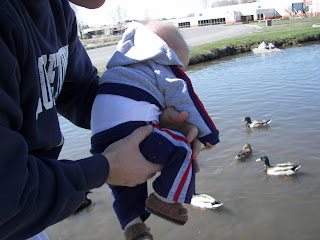 If you can see it, LeGrand is helping Kolby feed the ducks for his first time!! Cute!! 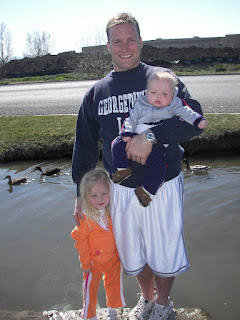 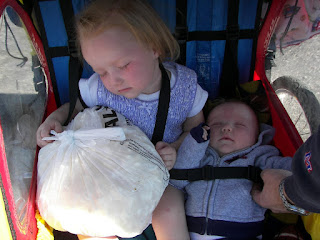 We had so much fun and got all worn out...Thanks for a great day everyone!!
Posted by Becca at 11:02 AM

What fun! Sometimes I really miss BYU and the football games and the noise and excitement. Looks like the snow has finally melted for you and you can finally enjoy spring too! (Except this morning I went and bought more flowers to plant but today is all cold and windy! Grrr...) No, I don't think I'm moving. We thought about it but it looks like we might stay here and add on to this house. I don't know...I'll definetly keep you posted!
Hey LeGrand- this is Jason. You look SO studly playing football. You're lucky I don't live there or I would school you. Miss you man.

Wow, I didn't know LeGrand was such a jock. That's cool. You do know how to start off spring break. Looks like fun!!

Hi Becca! It was so great to hear from you. That is awesome that you guys are crazed fans like us! I'm sad we didn't get to see each other there, that would have been so fun! That is cool that they had things for the kids before the game. I never knew that they did that! You're family is so dang cute! I love seeing the pics and reading about you guys! :)

That looks so fun! I wish Bridger could run around with your kids more. He would love playing football with you all! He is all energy. Way to go Addy! You are so studly riding your bike all that way! We love you guys.

Your girls are so cute in their little cheerleader uniforms! Looks like you guys had a very nice weekend! I love the springtime!

How fun. I have been wanting to go on a family bike ride, but I don't know hoe to get Peyton in the trailer because she does not sit up yet. How did you secure Kolby in there? Tyler took Micah on a bike ride on Saturday and told me he was a bit surprised that he had a hard time keeping up. We have to buy a bigger bike for Jacob. His is so small he can't ride it very well, so he uses Micah's sometimes, but of course, they can't both ride at the same time. I think we need to put some training wheels on Jacob's and give it to Benjamin!

Kelly, We just put blankets in the trailer and made a bed for Kolby, then we just buckled the seat bealt over him. He loved it. I was alittle nervous at first but it was awesome!! We'll have to see if that still works when he gets a little bit more mobile...She would love it!!!