Who knew that God would answer my Prayers like that?

Ever since we put Kolby's crib away, bed time has been a PAIN!! Without his crib to contain him he's everywhere except where he should be...in his bed. I would seriously have a headache every night and was getting tired of this battle. LeGrand and I decided that we needed to pray about what would be the best thing to do... After we prayed we had the feeling that we needed to LOCK Kolby in his room. I was surprised! What Lock my baby in his room??!?!?! The next night I talked with Kolby about being a big boy and that big boys need to fall asleep in their beds and stay in their beds all night long. After we were all ready for bed I went and put him in reminding him to say in his bed. I told him that if he got out I would lock the door. Well within about .05 seconds he was out of his bed and in our room. (This kid is FAST). I picked him up, put him back in his big boy bed and walked out and locked the door behind me. He screamed, cried and called for Momma and then Dadda. He was crying saying that we locked the door. After about 10 minutes I walked back in his room and picked him up in my arms. He kept saying... "Mommy, you locked the door.." over and over again. I layed him down in his bed and told him I wouldn't lock it again if he just stayed in his bed. He said OK. I thought, "Here we go again". Well he actually stayed in his bed, and has gone to bed and stayed there for 5 nights now. I just remind him that if he gets out, I'll lock the door. I was really surprised when we got that prompting, but it worked like a charm... I'm so grateful that some prayers get answered really fast..... if not, I might have already pulled all my hair out. Finally we have peaceful Bedtimes again!!!! 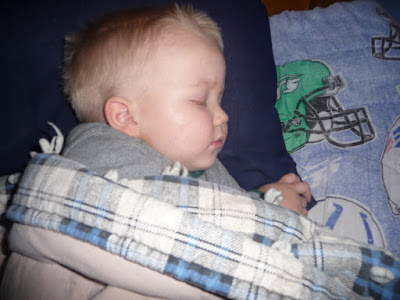 I can't believe that he's already big enough to be in a bed! I'm always a wimp and either wait until they are 3 or kicked out by another baby. He is sure cute!

I can't wait to see you next week!

That is what we did with Bridger too! Worked like a charm. Bedtime can be such a struggle sometimes I am glad it has improved so much...and seriously he is so grow up. It sort of makes me sad.I feel like we are missing so much sometimes.

And answered prayers... one of my favorites. :O)

I'm so glad it worked so well for you! I had to do that with Jacen. I leave my babies in their cribs until at least 3 though. He's getting to be such a big boy--it seems he was just born.

I'm with you I can't believe how much inspiration I get as a mother... thank goodness for the tender mercies of the lord!!!!

I wish every prayer could be answered so simply and quickly.

What a peaceful sleeping baby. Good for you guys as well! I think I'll leave Peyton in her crib till she's five...is that a bad idea??

I love your family. You guys are the greatest, seriously. And I really think you should check out my blog and follow it and spread the word to every living creature on the earth...so I can feel good about this and get my business going! :D And lets not forget about our deal...remind LeGrand. ;) ;)

Yeah, we did that to Hunter. I actually put a doorknob thing on the inside of his door and threatened to shut his door if he didn't stay in bed. Works like a charm!