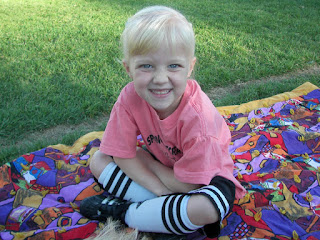 Adelyn's Soccer Season
For those of you who saw Adelyn play soccer last year, you might not recognize her now!!! Last year Adelyn was adorable as always, but she really didn't want to be out on the field....She wanted to hold daddy's hand, mommy's hand or even Marcia's hand...Thanks for running the field with her Marcia, she loved it!!
Well, This year she had a blast!!! There was pretty much no holding her back!!! Adelyn was aggressive, happy, totally into it, fast and when she fell down or got pushed over she got right back up. LeGrand was her coach again this year, and if you can tell Adelyn picked out the color of their shirts this year. No it's not Pink it Salmon!!! LeGrand and the LeGrand wasn't totally thrilled with her choice, but he still wore it.....ahhh what a cute dad!!! She might not get to pick out colors again...but that's ok! ;) 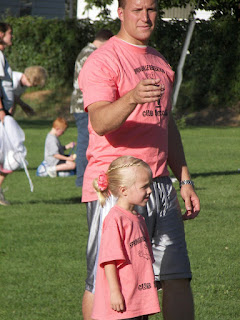 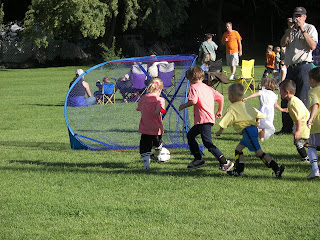 Here's Adelyn scoring one of her goals. 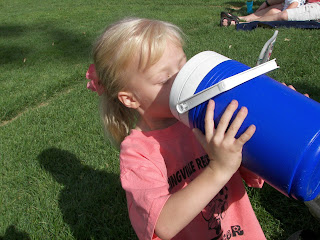 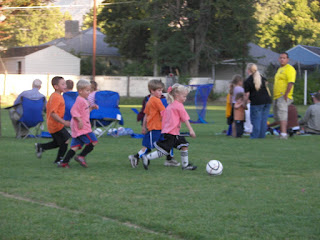 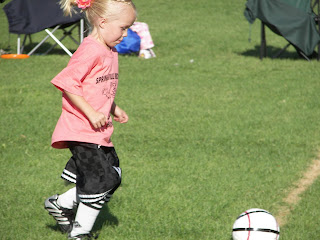 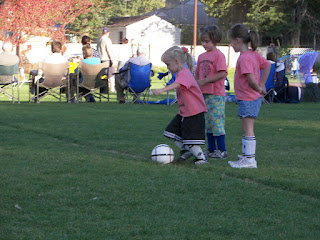 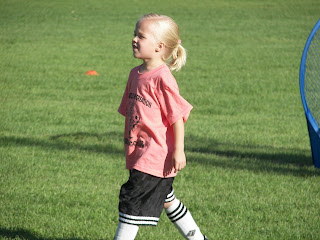 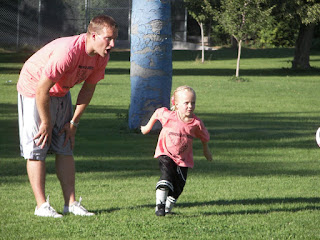 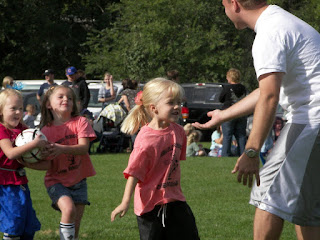 This is Adelyn running to LeGrand to celebrate another goal!! She's soooo cute!! 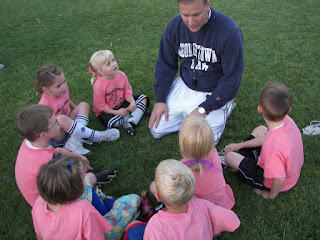 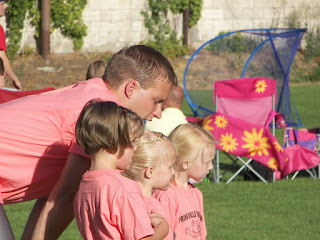 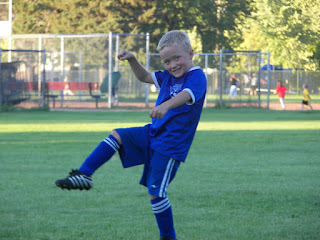 Brayden had so much fun this year playing soccer. Just look at him!!! Brayden is a natural athlete and he loves being involved. He looked forward to every game, every practice and played his heart out. This might be his last year playing soccer, since next year he can start football....he's been waiting to play football practically since he was born...he's just like his daddy!! LeGrand was an awesome coach again and we had a lot of fun cheering!! Go Brayden!!! 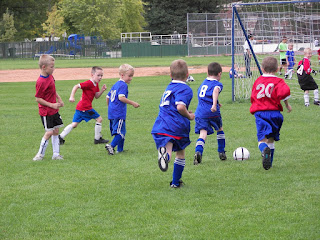 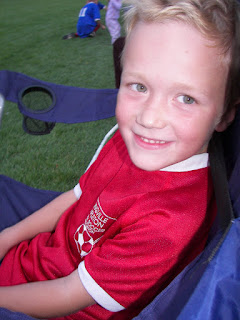 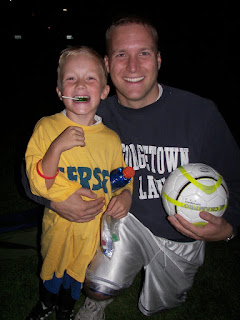 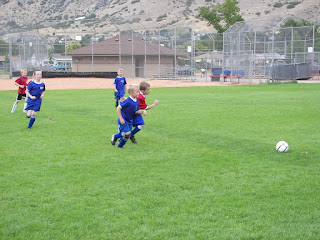 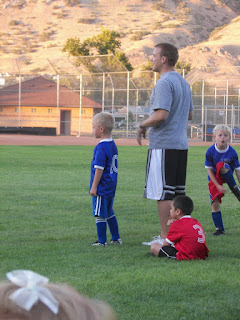 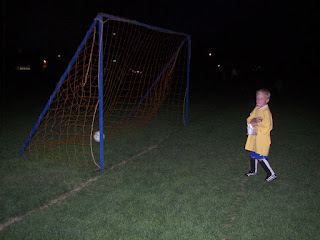 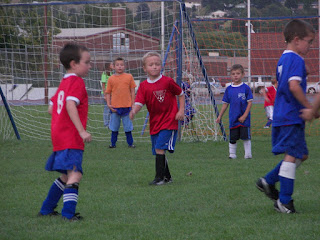 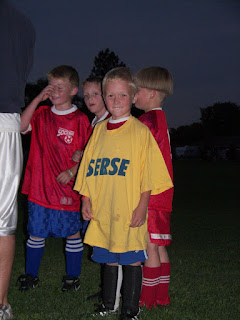 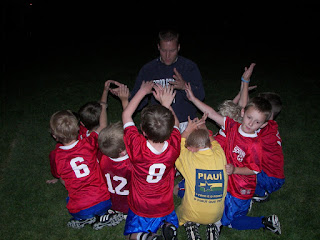 Brayden you are an awesome Soccer player, but an even better kiddo. Thanks for being such an amazing guy!!! We love you!!

Our Little Cheerleaders
Ok, this post wouldn't be complete without showing our little cheerleaders!!! Sophie and Kolby cheered for Brayden and Adelyn at every game!!! You guys are such good sports!! 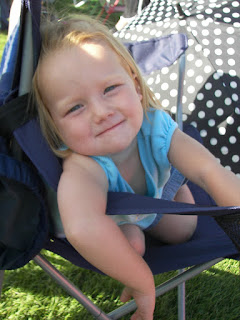 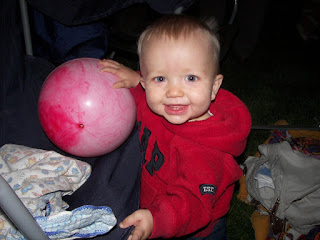 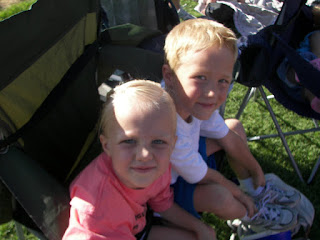 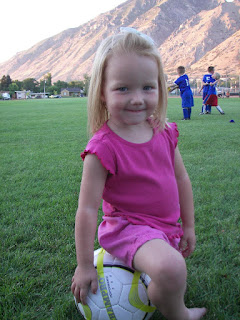 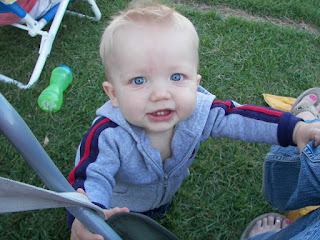 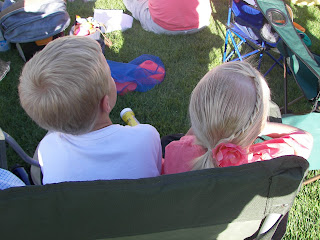 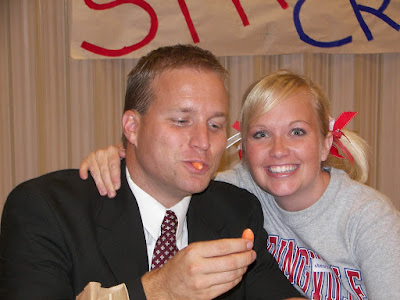 I love it that the kids like supporting each other!! I love cheering for my kids... LeGrand and I are their biggest fans!!! It's sooooo fun! It was a great soccer season...but now that we aren't running everywhere I'm kind of glad it's over...until next year!!
Posted by Becca at 2:00 PM

your kids are so cute. you're such a good mommy!

These are such cute pics! How fun! I can't wait til' my kids are old enough to play! How exciting! But I feel bad for the boys on Adelyn's team who had to wear "salmon" LOL!

The pictures are so cute! I love Adelyn's pink shirt and such a cute hairstyle for soccer! (:

First of all Addy...WAY TO GO on the pink shirts! I would be all for it and let's just say it was a treat seeing your Daddy dressed in pink. I plan on showing your Uncle Ammon in the morning when he wakes up!!! He will love this!!;-)

Way to go you cute kids!! Congrats on a great season!! You guys look great on the field!

Becca, you and I must be twins separated at birth. I was waiting and uploading pictures of our kids' soccer season right now, when I decided to check your blog while I was waiting. We must be in the same phase of life or something!!! Ours will be up in the morning. I love you and miss you and will call you back tomorrow!! Luv ya sis!!

P.P.S. The comment above was deleted by me cuz I was still signed on under jeannette's name! Oops!

Kirsten - you should have just left the comment on! I echo all of your words about how cute these Laing kids are and what great parents they have!

Cute soccer pics and super cute new pic of your family. You guys are so dang photogenic! Can't wait to see you in the flesh! :O)

Hi!!! How are you?! I was so excited to find your blog, and find the rest of your family too! I've wondered how you guys are doing. My mom was pretty psyched too. What a cute litte bunch of toe-heads you have! I guess we couldn't have expected anything less from you and LeGrand.

Heidi just had her first baby. Mike has been home from his mission for a year now, and John will leave next summer . . . I can't ever wrap my mind around it!

Tell your family I said hello. I tried to stop and see you parents a few times in Las Vegas a few years back, but they were always out of town. I miss them like crazy.

I have a blog too. The address is http://aclaybasket.blogspot.com/
I'm linked to Heidi, and my mom is going to start a family blog soon.

You guys are adorable! I love you all!! How are you all such an adorable family? I'm glad your my family! xoxo
Ps Bryan and I went to an awesome fun thing last night called a pumpkin walk! We want you guys to come with the kids and see it! It was really neat! the Kids would love it!

pps... we are moving into a condo this weekend! With an extra bed room and actual room to play and stuff! We should have another sleep over! xoxo
love you guys!

I agree that LeGrand definitely looks good in pink-ah-I mean-Salmon. It just might be his color. You are making me so excited for when I can have kids in sports too! Your kids are SO cute and if they are anything like their parents they will be amazing athletes!