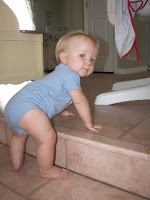 Wow, It's amazing how much a baby grows up in just one month. Kolby is crawling everywhere now! Yes he's even crawling up stairs. He pulls himself up to stand and l 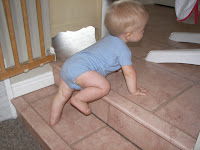 oves getting into things. He' now our little vacuum cleaner...just kidding, it seems like I'm vacuuming and sweeping constantly, but he still finds little Cheerios and other things on the floor. 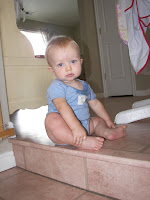 It's actually been nice, I can tell the kids that they have to put their toys away or else Kolby will chock on them and it usually works!;) I think I might have to use that line from here on out, even when Kolby is older....

Kolby's totally ticklish now, he claps, waves, says Momma and Dadda(I love it!) He just got 2 more teeth so now he's up to 4. Kolby loves being big and following everyone around. The kids will crawl somewhere and he will follow them. He loves the attention he gets from them. Kolby you are a lucky kiddo, there are so many people that love you!! 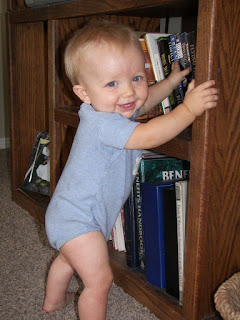 Kolby is so excited and proud of himself. He loves being a little bit more independent. I love watching him, but oh boy my life feels 100 times busier running after him now. It's always busy being a mom of four, but now I understand exactly what you meant Kirsten when you told me, "just wait till he's crawling and getting into everything!" 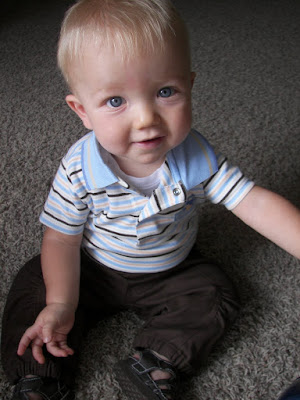 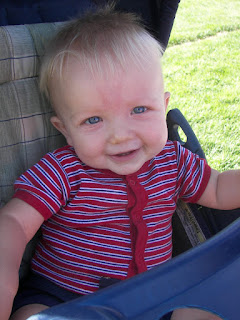 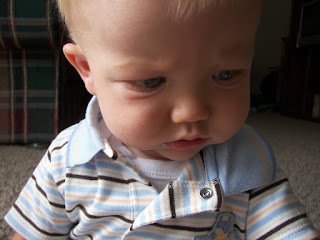 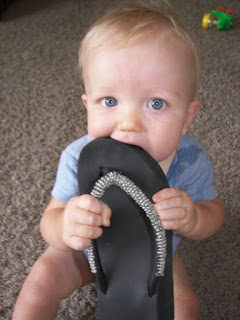 Ok, I had to document this picture. Yeah it's probably one of the grossest things Kolby could suck/chewy/drool on, but here you have it. When Sophie was little, she was obsessed with shoes, but she wanted to wear them...not this little guy he wants to eat them. It's sooooo gross. If he can get a hold of any shoe in any possible way he will do it. I swear he has a sensor for shoes....then he wants to eat them....I can't even think about how many germs are on the bottom of peoples shoes or else I will gag!! Yes, Sophie used to be the "shoe napper" now we have a "shoe nibbler". Yuck!
Posted by Becca at 3:00 PM

Shoes.....yum! What a cute little LeGrand he is. Absolutely adorable!

he is a total cutie. he looks so much like grandpa garth every time i see his little crooked smile. so precious!

He is a beautiful baby boy. Pretty soon he's going to turn into a handsome little man. It crazy how fast babies change! 8 months is one of my favorite ages.

That is such a fun busy stage! Drink it up!!! Before you know it he'll be screaming "no" at you and not eating anything you make for him. :O) Can you tell which stage my kids are in? :) He's adorable! Way to grow Kolby. We love you!!!