I'm a little slow getting this post done, but Kolby is 5 months old now!! It's hard to believe that he's growing up soooo fast!! We are loving every minute of it, seriously he's been such an amazing baby!! Kolby is doing lots of new things everyday now!! Here are some pictures and videos to document it all!! 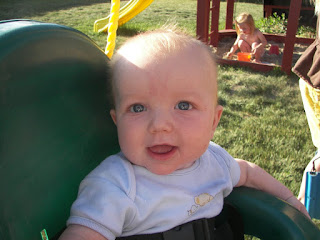 Kolby loves the swing in our backy yard. Well he still loves his little swing inside, but the bigger one is way better!! 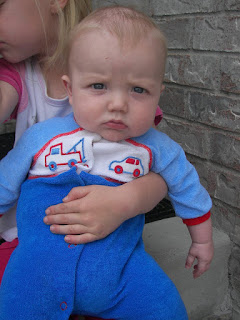 I seriously could eat this kid up and so could everyone else who knows him. His little personality is coming out. His eyes are sooo blue. I couldn't ask for a more pleasant, cute and happy baby!! 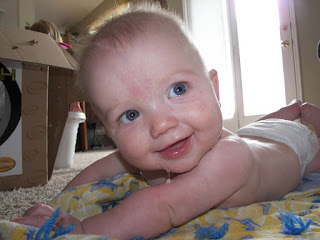 This one is one of my favorites of Kolby....I love watching him grow... my only compliant might be that he's a drooler.. I hope it just means that he's cutting some teeth, but he's been drooly for months so we'll see. I had to include this one since he looks adorable and he has his little string of drool that's almost always with him. 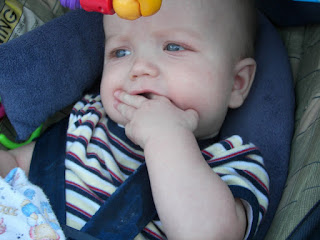 Kolby has definately found his hands and feet. He will but anything and everything in his mouth that he can get his hands on!! I have to change his socks several times a day now since he likes to suck on his toes too. 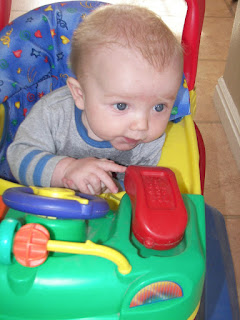 Kolby is loving his toys, he loves to grab his rattles, hold stuffed animals, play with things that light up and make sounds and it all goes straight to his mouth! 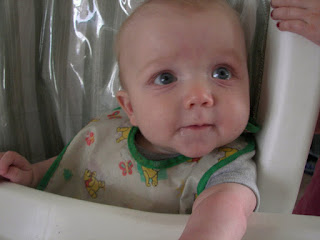 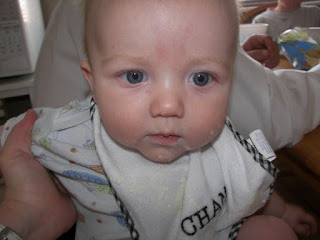 Kolby now eats baby cereal. At first he shuttered and gagged and spit it out, but after 2 times he's a pro. He loves it now and eats it all. I think he's his father's son!! ;)
These video's were taken the first time Kolby really laughed a lot. He's so happy and smiley, and has giggled a bit, but here he is really belly laughing!! It's adorable...to bad he got bounced around a bit, for LeGrand that it...;)


Kolby has also found his little voice...see the video on the It's finally Summer Post... It's adorable!!
Kolby sleeps through the night too... yup I'd say he was the "perfect" baby!! Kolby, we love you so much and are grateful every day that our Father in Heaven has sent you to our family!!!
Posted by Becca at 1:55 PM

I love seeing all those pictures! What a handsome little guy! It totally takes me back to when Bridger was a little guy too. Love it!

Kolby is so dang cute! I love babies! :)

I LOVE this post, cute, cute, cute. It sounds like Kolby and Peyton are very similar babies. Peyton also sleeps through the night, 11-13 hours, she also takes a 2-4 hour nap in the afternoon, along with a short morning nap. She is very happy and content, and yes, sadly, a huge drooler too! The boys got their first tooth at 7 months, so it seems a little early for teething, but she does stick everything she can grab into her mouth to chew on, she even bites on my shoulder sometimes. Anyway, sorry this is a long comment! Maybe I need to do a post!!!

He reminds me SO MUCH of Brayden I can't even believe it. Your kids all have the same "Laing" look to them and I think it is so cute you can definately tell they are all siblings. His little laugh is adorable. I love it when you do something riduculously silly and they LAUGH their cute little heads off. It is so fun! He is a keeper for sure! I can't believe he is almost six months now!

Babies are so cute, Alexis is 15 months old, she doesn't seem so small anymore and I miss that.