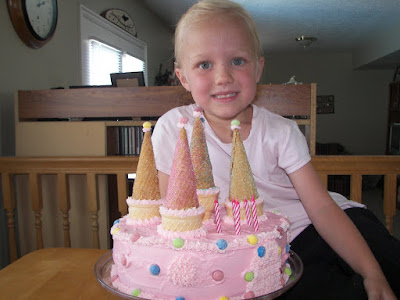 Happy Birthday Adelyn!!!!! Wow you are such a grown up girl!!! We are so grateful that you our our little princess and that God sent you to our family!! We love you sooooooooooo much!!! 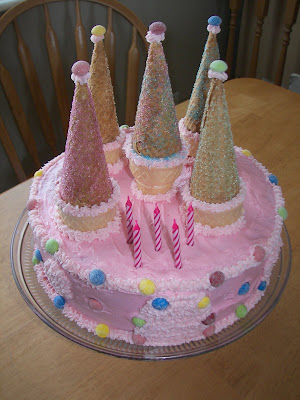 As you can see, Adelyn wanted a Princess Castle Birthday Cake this year!! It had to be pink...and she was in love with it!!! It's so fun to be able to make something that brings such a big smile to your kids faces. I love that the kids get so excited about picking what cake they want for their birthdays....Some have looked better than others...but that's ok, It's fun to do!! 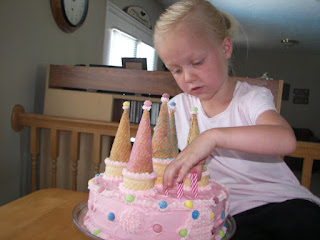 Adelyn was the first one up ready to celebrate. It was early but who cares, it's only your birthday once a year... Adelyn wanted to open her presents first thing, so by 9:00 am she was having fun playing with everything... After a wild scavenger hunt she found her big present which was a new bike. She was soooo excited about it!!!! 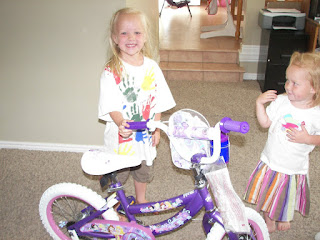 Here are the 3 biggest kiddos with their bikes. I think we definitely have a bike gang going on here. Sophie was really excited because Adelyn gave her the old bike and helmet...look at how big they all are now!! 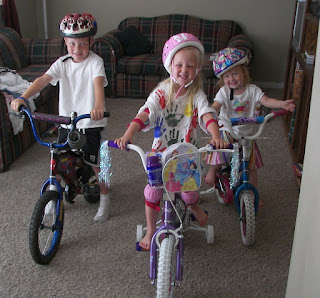 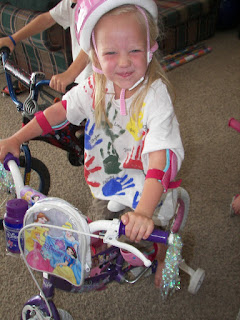 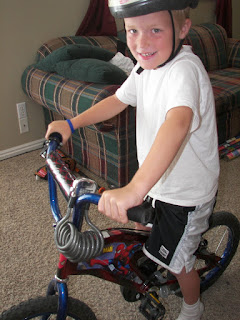 Sophie is excited to learn how to do this bike thing for real now....She's catching on really fast!!! 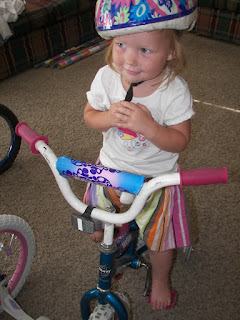 For Adelyn's Birthday we went with the Carter's and the Stitt's to 7 Peaks!!! I wish I got more pictures but it was pretty much all I could do to keep up with our 4 kids at a huge, crowded water park. Most of these were at the end of the day...but at least you get the picture!! 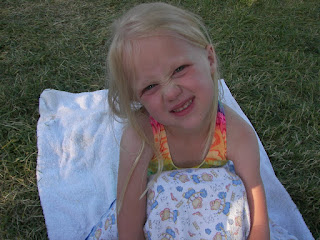 Brayden had tons of fun swimming around. What a little fish!! 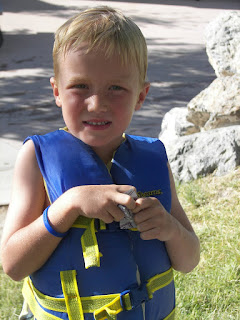 Candace and Kolby...oh Kolby is soooo squeeze able and fun to hold and cuddle with. When we were on the Lazy River, Kolby was on my lap and Sophie was on my arm in the tube. Kolby fell asleep, I wasn't really in a position to steer the tube and right before we went past the waterfall some kids bumped into us and we went straight under it. I tried to block the huge amounts of water that fell on us from Kolby's face, but he woke us and cried for about 1 second..then he fell right back asleep about 1 second later. It was pretty funny...then it all happened again. I'm glad he's such a good baby. I was tempted to go down a big water slide with him...I bet he would have slept through that too...;) 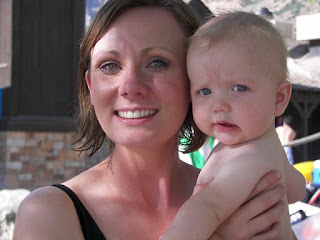 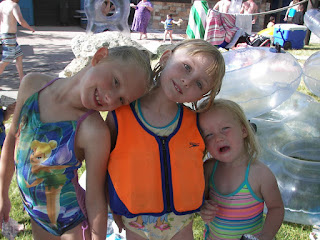 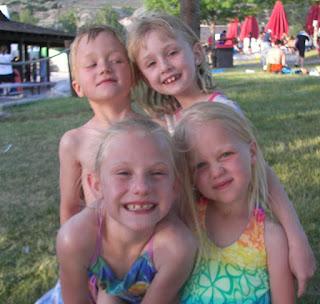 Holly is one of Adelyn's favorite people! 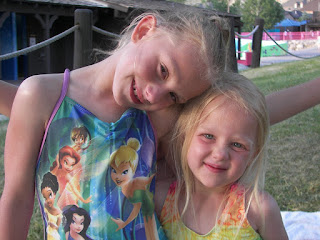 Sophie had fun, but she wanted to stay really close to Mom the whole time....we will work on not being so worried about swimming... 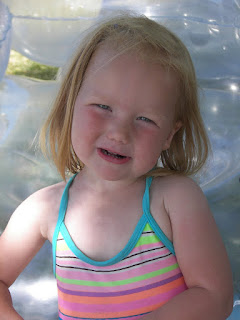 I had to get this picture...Kolby loves to suck on his toes now. Kind of gross I know, but it's soooo cute, or maybe he's just cute!! 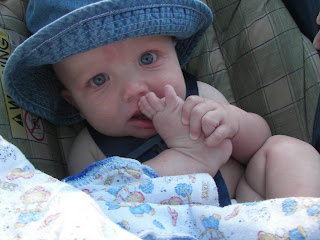 After we got home from 7 Peaks we did the cake!!! Adelyn was so excited, (Brayden looks like he's totally bored..it was actually just worn out after a long day) 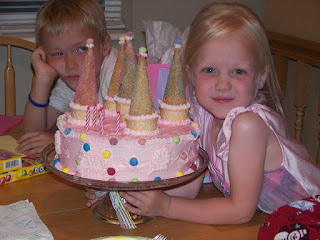 Great Grandma and Grandpa Rasmussen came over to have cake and ice cream with us...Adelyn got her card, money and some birthday spankings from them....Thanks you guys...We love you!! 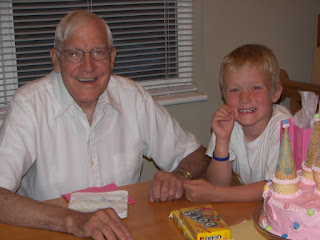 Grandma with a precious arm full!! 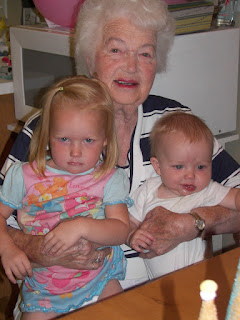 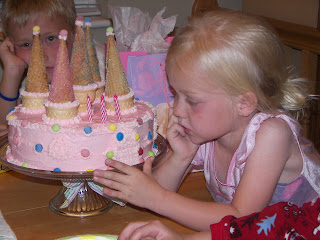 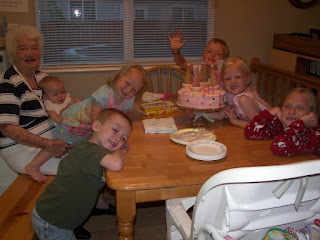 Grandma and Grandma Ras, Paul and Whitney sent Adelyn a really cute present. It was a purse full of money!! There were $1 bills shoved in every pocket. It was fun to watch the look on Adelyn's face when she opened up another pocket and found more money and gum. Thanks guys for such a wonderful, thoughtful, fun present. If you can tell by this picture, she loved it. 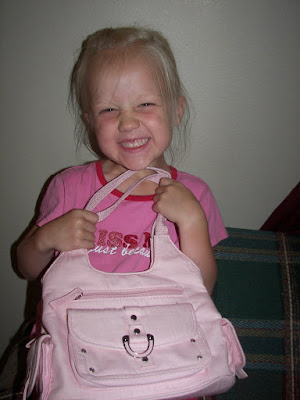 Wow, I think Adelyn had an amazing birthday, we got to spend the entire day with our family, and friends, presents, a cake, and money from Great Grandma and Grandpa, Nana and Papa, and Grandma and Grandpa, Adelyn is excited!! Adelyn LOVED all the phone calls too!! Thank you everyone for helping make her birthday soooo special!!

Favorite Foods: Mac and Cheese and Hot Dogs, Chicken Noodle Soup, Pizza, Broccoli, Celery...(Adelyn is such a good eater, she pretty much likes everything!!)

We Love... your sweet disposition, your willingness to help with Kolby, your sense of humor, your funny names and phrases that you make up, your smile, your laugh, that you are quick to obey, that you want to do what's right.

Hey Becca, I love the darling cake!! I really like how you journaled all the things Adelyn likes at her age right now. great idea! I'm going to have to remember that.

Cute idea for a cake! Way to go, mom!

Are you somehow able to keep all of these posts somewhere other than on this blog? ADORABLE cake, by the way!! You continue to amaze and inspire me!

You did such a good job on the cake. Talyse has that same bike she got it for her birthday this year also. Girls are so much fun. Looks like a very fun birthday, for everyone.

Happy Birthday Addy! I am sorry this year is our worst year yet with birthdays! I think when I am pregnant half of my brain goes into hibernation or something.:( Anyways, we adore you Addy! You are such a beautiful sweet happy niece. We are so excited to see you soon! I am glad you had such a fun day!

We love you so much Adelyn, what an awesome cake. I love it. I can't believe you took Kolby in a lazy river, how fun. I just took Peyton swimming for the first time yesterday at my mom's. The water was really cold and the other baby that is Peyton's age that was there didn't want to be in it. He cried but Peyton gasped at first and then was very interested. I want to post the pics, but my mom gave me money to go buy her a suit at Target...Anyway, I have had such a hard time finding any suits at all, all they had in her size were these bikini type tops, so I got one so she would at least have something on, but I'm not sure if I should post them! I guess it doesn't really matter since she is so young it's ok for her to be naked.

I love the cake Becca! You never cease to amaze me with your talents!

Love the cake!!! You do the cutest things with and for your kids!!!

Happy Birthday Adelyn! I can't believe how grown up you are...I remember when you were born and we walked in the room and they told us you were a "girl!" We were so excited and you are a darling, sweet girl! I hope you have a great year and so much fun starting kindergarten.
Becca my dear...once again fabulous job on the cake! I will definately do this one for Brynlee's princess party next year...you'll have to help me when the time comes. I love how it turned out...
And tell Candace that she is beautiful and shouldn't hide from cameras!!! ;-)

OK - that adorable cake has been requested by one almost 3 year old. Did you make it up or can I find instructions somewhere?